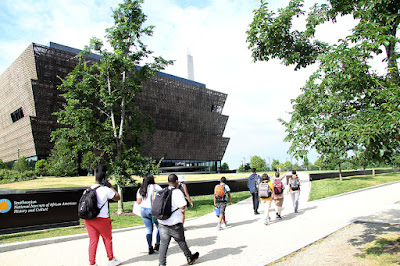 When I asked the youth which part of the trip they liked best, they all said the same thing: "The Museum." I could not disagree.

Last week, I had the good fortune to tag along with the Youth Leadership Team from Friendship Court, as well as some friends and mentors, on a trip to Washington, DC. The purpose of the visit was for the seven high school students to learn more about Equity Planning, property development and how the two intersect, through the lens of some specific projects. It was the culmination of a two-year program of civic education to empower them to be active contributors to Friendship Court’s redevelopment plan.

After taking the morning train and depositing our luggage at a rented townhouse, we traveled to Southeast to meet with Vaughn Perry, Equitable Development Manager of the 11th Street Bridge Park. The 11th Street Bridge project is one that I have been following closely because it is cool in so many ways. Attempting to bridge the Anacostia's social divide is challenging enough but they are also setting a new standard of positive social impact.

The project is relentlessly community-driven. It started with an honest discussion of whether the neighbors even want the park, and if so what kinds of features, uses, and programs will make the project appealing and useful for the entire community—especially those under-served neighborhoods on its south bank. This striking architectural project is accompanied by an equally bold Equitable Development Plan, which has specific strategies for workforce development, affordable housing, and small business enterprise. Although it's by no means required (or anything like standard practice), they’re on track for a 1:1 match of community development monies raised to park project funding.

Tyquan asked what was on everyone’s mind: “Are you really going to build this?” Vaughn didn’t hesitate, “We’d better build it—too much is at stake not to. Let me just say this: I’m 99.9% certain.”

From a physical standpoint, it’s still just a plan, although work is slated to begin in a year or so (a speed made possible by the fact that it is being built with local, not Federal, funds.) Still, they are not waiting for the physical structure to start pulling people to the river or to pursue their equity mission. They co-host a major festival in adjoining Anacostia Park, as well as youth programs (focused on gardening and the river), neighborhood-specific public art, a Ward-8 home buyers club and more.

They host periodic walking tours and I think we should take a group from Charlottesville. In any case, this is definitely a project I will continue to watch.

The meeting with Vaughn was a big highlight for me, but it was just the beginning of an ambitious agenda. The youth also met with Matthew Steenhoek, vice-president of the firm that is developing the massive mixed-use District Warf project. They had a private visit (!!!) to the National Museum of African American History and Culture. And, they toured SeVerna on K with Mel Thompson, of Grimm and Parker—the firm selected to redesign Friendship Court. SeVerna is very similar to the envisioned future of Friendship Court and it was very enlightening to walk through an actual space (including some apartments)--much better than looking at plans or drawings. I think it would be useful for more people to do that.

It was a whirlwind trip, with a lot to take in and no small amount of walking and riding around the capital city. It was great to hang out with the kids, most of whom I’ve known since they were very young. It was also quality time with some of my favorite adults—Barbara Brown-Wilson, Claudette Grant, Beth Meyer and Margaret Haltom. It’s nice to be with friends but it’s especially great to be together in beautiful spaces and to see real-world expressions of ideas we talk about so much.

I'm looking forward to applying some of what I learned to my work in Charlottesville.
Posted by Peter at 10:48 PM