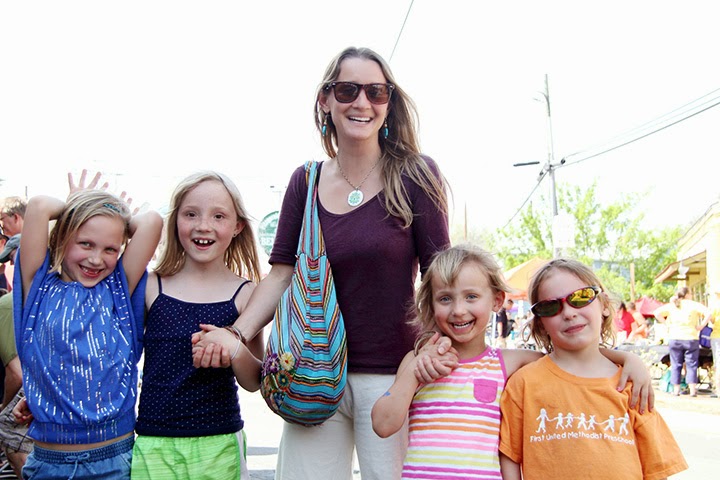 All kinds of people stopped by the photo booth but they all shared a desire to document their love for one another.
[More Photos]

The Tom Tom Festival / Belmont Bash was a unique celebration in many ways. It had an unusual origin and interesting results. For me, the whole thing was an experiment in a few ways: how would one plan a multi-source celebration, what would a 100% DIY street festival look like and how such a party could inform public planning? It was amazing thanks to many people’s hard work.

This three-part story examines how event came about, how it went and what I got out of it from a community-development perspective. I’ve spoken about why the idea became a reality and some issues that arose along the way. Today I’ll share some impressions about the interactions that took place—of course from my own perspective.

The Belmont Bash was really successful.

Tons of people showed up and it seemed like everyone had a good time, with few if any complaints. It was a beautiful day, the music was great and there were many small touches that really created an atmosphere of sharing—like folks from the neighborhood association strolling around with free cupcakes.

We knew that it would be a fun party but it was also a project; an experiment of sorts. We wondered, for example, what kind of crowd would come? Would it be neighborhood regulars or people from outside looking for a good party? Would there be unique interactions? Could a block party serve as a venue for city research about community preferences?

My answer to the first question is “yes.” The party attracted both the usual suspects and itinerant revelers but mainly a surprising category that seemed the largest to me. I met many people who live, work, and play in the area but who I had not met before in the standard channels (like the neighborhood association or PTO) or even in my atypical engagements like the photo booths. This was really exciting because there was a huge joy in mutual discovery but also it really validated the model of block party as community networking tool. As a very real illustration, the neighborhood association meeting that took place the following night included several new members who had been recruited at the Belmont Bash. That's concrete evidence-backed success.

Many Small but Intense Interactions
Of course, the neighborhood association is only one small network in community web. The soul of any village lives in the simple, casual interactions between people in informal settings and those were present in abundance. The photo booth was an anchor that kept me from circulating around the space as much as I would have liked but I had all the contact I could handle.

I met people’s babies, heard about estranged wives or what it felt like to be shunned, compared notes with other photographers, caught up with old friends, talked about the local school, saw people’s best and heard their dark secrets. It was like being a bartender or a barber but with the intense emotional mobilization of an artist at work. I learned a lot about the neighborhood and I witnessed fascinating cross interaction as well.

I had not realized, for example, that the digital divide also means that some people don’t have access to the snapshots that seem so ubiquitous in our culture. So those people loved the photo booth and the free prints I offered, but many other folks valued the social opportunity and wanted to document their affiliations in this special setting. It was the capital manifestation of the photo booth exercise and the Monticello Road project on the whole and it validated the entire enterprise.

A Venue for Public Comment?
Experience prepared me for the intense personal interaction but I also was wondering if there might be a larger, aggregate opportunity as well: could town planners be there in a focused way listening and gathering social research about what the community wants in a way that is comfortable and that involves people who do not haunt the formal charrettes and public-comment sessions?

The Office of Neighborhood Development Services supported the Bash from the beginning because they saw this opportunity but the mechanics of how to solicit such information effectively were not really fleshed out. Throughout the planning process, there was an idea of collecting input on the Belmont Bridge that held potential to be quantitatively and qualitatively superior to any previous input sessions—and certainly different.

Our quick and agile planning approach that worked very well in mobilizing support for a party didn’t really align with municipal government requirements around scheduling, contracting and other issues they deal with. Our permit was finalized very, very late (no fingers pointed, just a fact), which left the zone planned for the discussions outside of the party’s core and with too little time to prepare a professional-grade presentation. Those layout and permitting issues had the unfortunate additional downside of moving the party away from Mas, where some of the coolest discussions took place.

Some City agencies were there in a less formal way, offering literature and staff available for questions. That’s a great start and might even be enough, for a coordinator in a town of this size is often only separated from any given issue by a few degrees.

The question remains unresolved as to whether this would be a good venue for systematic (though non-traditional) research. For example, although there was not time for a knock-you-out presentation about the Belmont Bridge, I would think that a small team of interns armed with clipboards circulating through the party could have gathered tremendously interesting survey data.

All in All
Of course no event goes perfectly and the social research component is an opportunity for future exploration but on the whole it was a tremendous success. Almost everything we tried worked and those that didn’t presented clear learning paths for improvement: notably an earlier start to the planning process, finalizing the permit early and rolling with it.

Still, it came together stunningly well for a late-developing, shoestring, block party. It was a terrific experience that will have a positive impact. It changes the conversation about what/how a community party can/should be; what a celebration ought to be. We all learned something--I certainly learned alot.

Learn More about the Belmont Bash