Catching Up with the Santa of Mountain View 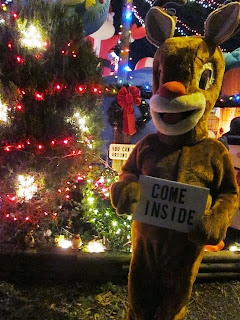 You have to be a pretty cool character to be profiled twice on this blog. North Pole cold, in fact!

We stopped by Mountainview Street to check in with Jeff Norford and the Santa of Mountainview. They will be included in the forthcoming cell phone audio tour. Their open-handed generosity and considerable commitment of time and money [not to mention their wackiness] exemplify the spirit that creates great communities.

They always get alot of well-justified press and they were recently interviewed in the C-Ville Weekly. I chose to avoid the inevitable questions about the electric bill.

Here's our conversation. The audio version will be ready soon.

Monticello Road: How’s it going this year? Is it exciting?

Norford: Yeah, it’s great. Every year it gets better and better. We have more and more people show up.

MR: How far do people come from? Is everyone local?

Norford: All over the world. We have people come from all over.

Santa: Well last year we had them come from about 2 countries. This year so far it’s been about four or five.

Norford: We had a lady from England, I know of, then some from Africa. From Thailand, China. From Japan. All over.

Norford: Yeah a mix, half and half pretty much. Really a lot of adults, elderly people come through.

MR: One time I was here last year and a seniors bus pulled up.

Norford: Yeah…Alll the senior busses come through. Every night…we had one tonight.

MR: The other day I saw some lampposts up in downtown Belmont or street signposts that have candy canes attached to them with a note that says “have a treat.” Do you know anything about that?

Norford: No I don’t know anything about that.

MR: Yeah it’s cool. They have little notes that say “Have a treat.”

Norford: Wow. I haven’t seen that.

MR: Well, when I think candy canes I think of here for some reason, I don’t know why.

Norford: We give out quite a few candy canes, that’s for sure. I’ve bought twelve-hundred candy canes already. So we’ll probably go through another twelve hundred at least, before Christmas.

MR: Can you please describe for me the schedule in terms of how long Santa on Mountainview goes on and what are the hours?

Norford: We start on Thanksgiving, we turn everything on and we run through the Sunday after the New Year. It runs until the fifth of January this year. We’re open from 5:30 til 10:00 every night. Santa’s here from 5:30 til 10:00 every night until Christmas Eve. And then after that we have the display open until January 5th for people to come by if they’ve been away for Christmas or something like that.

Norford: Hey, how you doing!

MR: I would imagine Santa needs a break after Christmas, has some cleaning up to do. Mucking out the reindeer stables, all that stuff…

What are your thoughts about have creative expressions out in people’s yards? I mean, most people are up to cool creative things but they don’t normally put it outside for everyone to see.

Norford: Not really (laughs). I don’t have Christmas inside; all my Christmas is outside. I don’t even have a tree inside. My tree is actually the one sitting outside—he’s way there in the corner by the skiing Santa.

Santa: A bus came here with a Santa driving the bus.

MR: It was probably just someone dressed like Santa. Not really him…

Santa: I was ready to say, “Would the real Santa please stand up?”

MR: He has a lot of helpers.

Santa: Yes he does.

Norford [to family]: Come on in!

Norford: They get so excited and the excitement of the seniors. That’s really something. We have 90-year old ladies come in…

Santa: and they’re as excited as a nine-year-old.

Norford: And the handicapped people and people in wheelchairs, we bring them in around the back way so they can still come in....

MR: Has anyone asked to be married here, proposed marriage?

Norford: Not that we know of.

Santa: We’ll have to get one of those back-of-the-magazine ordained ministries so we can…

MR: Wear your longjohns because it’s cold in Mountainview…

Norford: Oh yeah: it’s about ten degrees colder when you get inside of there.

Norford: Come on in!

Santa: It’s because of all the fans for the blow-ups.

Norford: There are a hundred seventeen blow-ups. Actually some of them have two fans, so there’s probably a hundred twenty fans going in there circulating air in there.

Norford: We have a lot of people say that. They walk in there and are like, “it’s colder in there than it is out here.

We just pump in air from the North Pole.

Norford: Merry Christmas. Come on in…