Glad I Photographed Those Old Houses! 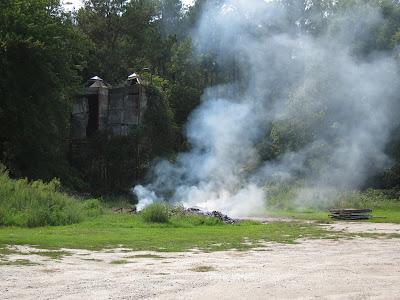 Accomack, VA 2011. This was a controlled burn, which is now illegal. [more photos]

Please permit a quick detour from Monticello Road to the Virginia Eastern Shore.

Many readers know about my other project—Succession—in which I photograph human spaces being reclaimed by nature. I’ve taken many pictures along US 13 in Accomack County, an area rich in abandoned buildings and farmsteads.

Something strange and bad is happening over there.

A string of arsons (more than 70 since November) have targeted abandoned buildings and have been done in a highly sophisticated manner, studiously avoiding both detection and human (or animal!) injury. Naturally, speculation about the arsonist(s)—and it’s almost certainly a team—and their motives, is rampant.

People seem to think that it must be some group of trouble-makers, anarchists, revenge-seekers or pychos and fear is taking hold. That’s a natural response to fire.

I haven’t heard anyone ask an obvious question though: who benefits by eliminating traces of old family farms? Most arson cases are related to insurance fraud but for that to be the case here would require an entire community-wide conspiracy, which though fascinating from a sociological perspective, would be highly unlikely. Big poultry, which dominates both landscape and economy seems a more likely candidate.

Perhaps it’s the manifestation of dark desperation, like the monster that emerges from the lake in that Police Song.

It’s certainly a sign that something bad is happening in that community’s soul and whatever the motivation, the effect is sad. Many people are afraid and an already-poor county is forced to divert limited resources to try to protect lives and property. Beyond the financial losses (some of which are heartbreaking) it’s a troubling erasure of past lives. Everything changes and if the arsonist hadn’t taken those buildings, Nature most likely would have. But this feels different: vicious in ways we've seen too many times before.

At any rate I’m glad I stopped and documented some of those tumbledown dreams before they were wiped away. Although I have a renewed urgency I’ll certainly be careful about creeping around those places in the future, lest I be collared on suspicion of pyromania!