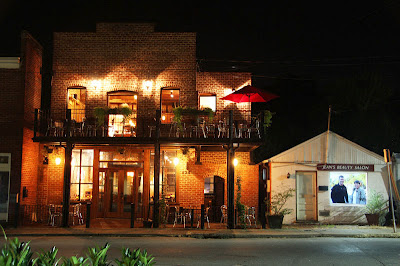 Among many other things, the Kickstarter campaign funded the Faces of Monticello Road, a community slideshow that ran for a week in July.

On Tuesday, July 31, the C-Ville Weekly ran a story by Katy Nelson about Kickstarter with several references to and quotes about Monticello Road, which had a successful Kickstarter campaign. Monticello Road is a great example not only because it used crowdsourcing to raise funds but because it is for and about the community as well. It is a tool that’s well suited to aid the project’s mission.

It was a short piece that touched on many things. I wanted to focus on the aspects that relate to art’s role in the community, so for greater depth, here is the full text of our conversation.

Nelson: Can you tell me about how you used Kickstarter to fund Monticello Road?

Krebs: Everything about my project is about removing barriers between people and there can at times be an invisible wall keeping too many people away from the arts. So if the project was to succeed in the way I wanted, it was important to make the art itself completely accessible to everyone--far beyond the usual suspects who go to openings. I wanted the art to be incredibly affordable. And so it was: everything was either free or pay-what-you-can. Yet, it all cost money--alot--so I wanted to find a way to fundraise that was completely optional (and mostly invisible) and that would allow people with little means to make small contributions and have it be really meaningful.

Kickstarter made a lot of sense because it's focused primarily on social networks (as is my project so there's a natural overlap) but it's not geographically limited as a donation box would be for example. The whole thing is about community and this allowed really wide participation and everyone to feel like their contribution (no matter how small) would be essential. And that turned out to be the case--we made our initial goal by just $6. As I see it, communities are interconnected webs of interaction and sharing. This created another layer, which was great.

The other thing that's good about Kickstarter is that the user controls the schedule (as opposed to grants which have their own cycle which can be very, very long) and there are no strings attached except those that I determine with my community, the contributors. So in my case, the campaign coincided with the show at the Bridge and the goal was to raise all the funds required for the exhibition, the many associated events, plus production costs for the free and subsidized stuff I gave away.

In the end, not all my backers wanted to participate in kickstarter but they wanted to donate so I got a second and unexpected wave of private donations afterward and those paid for the exhibit and public slideshow at the Local and a little seed money for the next project.

Nelson: Before crowd funding, how did you and other local artists finance your art exhibits? Has Kickstarter made it easier to find funding?

Krebs: Artists depended mostly on sales. By taking the whole selling business out of the equation work can be more mission- (as opposed to acquisition-) oriented. It provides a new channel for funding but it's one of many ways and I only used it because it made sense--not because it's better than any other.

Nelson: Were a lot of your backers people that you knew personally? Or were they simply people who discovered your project online?

Krebs: The vast, vast majority were people I already knew. The onus is on the person with the project to recruit funders and it requires a very concerted effort to reach an ambitious goal. Still there were a few pledges that came came through kickstarter, which was neat, but it's more about mobilizing your existing network than growing it. Because it's about your network, the donations will reflect the geographic distribution of your circle of friends.

Nelson: Do you know a lot of local artists who are using Kickstarter?

Krebs: Yes, I know a few and I've made some donations. Because it's connected to social media though, I've also discovered a bunch of my old friends who live far away are up to cool things and I've donated to them too.

Nelson: A lot of people have called Kickstarter a sort of social movement--a way to democratize the art world. Do you agree? Or do you see it simply as a convenience?

Krebs: Yes, I think that's true--especially because it's so quick and easy to make a small contribution. We have to be realistic, though, when we talk about democratization. The digital divide is very real and I think it coincides with the Art World barriers. This doesn't touch that at all--it might make it worse.

Nelson: Most importantly: How do you think Kickstarter is changing the arts community in Charlottesville?

Krebs: Yes--I think it does in several ways.

First, it creates a more participatory model of art where the community (even if it's virtual) has an ownership stake in the art.

Second, it allows people to become patrons of the arts with very small contributions. Patronage is influence and I think it will broaden artists' ideas about who is in their audience--and I think that's a very good thing. I really believe that the best thing for the arts is a larger overall pie, meaning more people involved and invested.

Third, it will be an incentive to do art that is project-based. A campaign that says "buy my art because it's great" will not work. It needs to DO something. That's a mixed blessing.

Because it's not limited by geography, artists will be able to reach outside of the local area for support within a broader non-physical community, which creates interesting possibilities.

Finally, it allows artists direct access to funding and gives them a new business model.

It gives artists alot to think about!
Posted by Peter at 12:50 PM