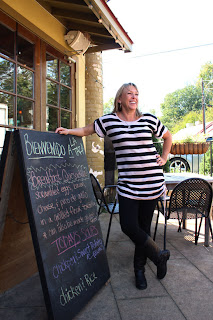 Just getting this photo of Melissa made the visit worthwhile but we accomplished much, much more.
More Photos.

In the latest step in our People of Monticello Road project, we set up an impromptu photo booth at a neighborhood café (La Taza), to try to catch as many passers by as possible. We had a portable photo printer and gave on-the-spot prints to anyone who agreed to have their picture taken.

Our larger purpose is to get art and artist out into the community and this was the fullest expression of that notion to date. We were out in the public, talking to them and making art in a way that was very transparent, in a space that was very comfortable—free from many of art’s usual barriers. There were many discussions, and much learned by all—and we managed to get some great pictures. That was no coincidence: the art came from those discussions.

We were operating without a script in uncharted territory so we didn’t really know what to expect. Because we were new at this, or shy, or whatever, we really limited ourselves to those individuals who entered the café patio and did not flag down as many random passers-by from the sidewalk as we had planned. Now that I see the importance of the interpersonal interactions and shared experience—even if just a love of java—I'm not disappointed. It’s as difficult to conjure a portrait from nothing as it would be to start a conversation from absolute scratch and then you have to wonder about the quality.

Indeed, although the whole thing was fun, the best and most useful images were from those most invested in the café: the owners and staff, who have really been champions of the project. That really validates the notion that great portraiture arises from familiarity, and the more the artist and community invest in one another, the better the results for all.

Huge thanks to Melissa and Vanessa at La Taza for letting us use their patio, and to Preston Jackson and Sarah Derr who assisted on the project.

Monticello Road is a photography and story-telling project about the people and places along a mile-long byway that is simultaneously humble and historic, home to many and a reflection of us all. There will be an exhibition and much more in the Spring of 2012.