Drawings on the Wall 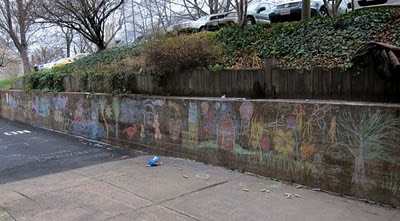 Despite the slate sky and chilly temperatures, we had plenty of help with our chalk-mural wall.

During our annual Holiday Open House, the McGuffey artists provide hands-on opportunities for children (or anyone) to make things. Because of the December date, most artists choose to holiday-themed projects—potato-print holiday cards, for example.

I couldn’t think of what to do, but then I remembered the last time I worked with masses of kids: StoryLine. In that successful project, kids went wild muralling all over the downtown Free-Expression Wall. McGuffey is surrounded by some surprisingly inactive spaces—one might not guess it’s an art center if you couldn’t see through the kaleidoscopic colors through its huge windows. A mural, full of youthful exuberance, was called for.

So I gathered as much sidewalk chalk as I could find, borrowed some hand-wipes from one of my gracious neighbors and that was all my preparation: I didn’t want to plan too much but rather see what would happen if I just turned people loose. I didn’t want to be too loose however, there had to be one rule: no words, just pictures. While StoryLine resulted in something beautiful to behold, the Free Expression wall, which must obviously be completely unregulated most times, is normally a visual black hole. Left unprodded, most people’s expressions are of the “Go Cavs” or “Johnnny {hearts} Sallie” category. I wanted art, not tags.

It turns out that blank canvas syndrome is basic human nature but it is easily overcome. No one did anything when I invited them to just draw. But, when Sebastian and I started in with a garden theme of flowers, houses, balloons, and flowers, people knew what to do and went right to work.

In an hour’s time, the wall was completely filled. Sometimes small children made only wandering lines or squiggles but with only a word or two of guidance, even they were channeling imagery. Parents and children took part in equal measure and as you can see from the photograph, the fruits of their labors were nearly indistinguishable.

Only one family frightened me with what they drew: all three kids, with blank acquiescence from the parents, calmly and systematically drew X’s through every drawing they could reach. What’s with that, I wondered? I challenged them to contribute something positive rather than simply trying to destroy what others had done. Even they came around after a few minutes.

It was a fun adventure and just like happened with the StoryLine, a driving rain quickly eradicated our efforts. It was an ownership stake, even if temporary, on the space and on our ability to create something visual and physical from our abstract thoughts and aspirations.

Next year, maybe we should use paint instead of chalk.
Posted by Peter at 8:49 PM