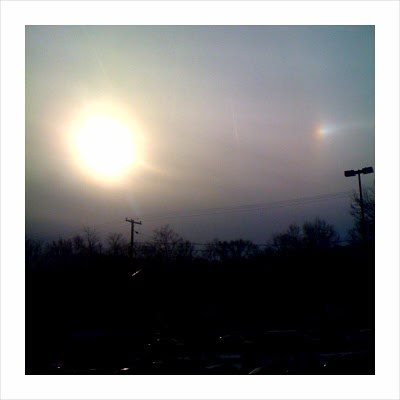 I always enjoy pushing the limits of my camera phone. This one shot with at the sun, from a moving train, with the "Lola" filter from CamerBag. Many photographers use their cellphones the way they might have used a poloroid. Now they offer an aesthetic that nods very self-consciously in that direction.

The scene inside the café car on the southbound Amtrak 171 Regional service from New York to Lynchburg was animated and bright. I came in to get a coke and shake the lethargy from my legs and decided to sit and look out the big windows at the enclosing winter landscape. A vivid sundog told of ice crystals high in the atmosphere, vanguard to a immense winter storm.

It was a good situation to push the limits of my cameraphone, as I like to do when I travel. The photographic act opened the floodgates of dialog with the fellow café car passengers. The man at the table with me turned out to be filmmaker Patrick Webb, who like me was returning home from a work stint in the City. The guy behind me with the Ricoh was Sebastijan Jemee, formerly of Charlottesville, now coming down from New York leaden with photographs of his own for a show at the Garage. He had a sidekick who I never formally met.

Conversation swirled from table to table and took on the tempo of a Virginia Reel with the advent of a garrulous bank manager from Roanoke, our unofficial M.C. He introduced himself to everyone in the room with a bright smile, and though I do not remember his name, I could recite his itinerary from memory: Philly to Roanoke via Lynchburg, then back to DC then back to Lynchburg and finally home to Roanoke.

A few other guys in the lounge—and they were all men this time around—nodded or injected the occasional insightful comments but largely kept their cards close to their chests. As we zigged and zagged through the Piedmont and cocktails came out, connections were made, business cards exchanged, and human experiences shared.

Travel can be the act of simply getting from one place to another, a tunnel with an entrance and an exit. The train can be that way too, a bubble rocketing through a straw at a hundred miles an hour. But it is a bubble of oxygen; a social space that encourages interaction. On Amtrak there is a unity between people that is quite special and sometimes the journey can be rewarding time well spent, much more than a necessity for reaching a destination.
Posted by Peter at 9:47 PM