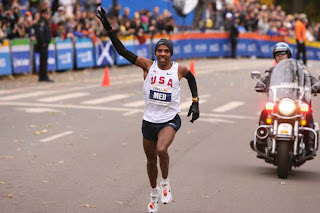 What a privalege I had, to witness Meb's triumph from up-close on the photo truck. Check back for a cool sequence where Errol Anderson caught Meb's decisive move.
Photo courtesy New York Road Runners.

What an experience! As always, working the ING New York City Marathon was a grueling experience, more exhausting in its way than running. For some reason, subject for a future post, this iteration was harder than any other. Obviously, orchestrating the largest marathon ever held anywhere will be a very taxing experience. Fortunately, something truly special happened on race day, in the person of a certain man with a three-lettered name.

Meb Keflezighi’s victory on the streets of New York was a big deal for American running and it was huge for us at New York Road Runners. Despite his Olympic silver medal, he was not many people’s pick to win the race. He was not even the most heralded American to toe the line. Meb has a huge heart and in the days before the race he was all business. His one-word answers at the pre-race press conference hinted to me that he had big ambitions in mind.

Meb’s a legitimate champion, boasting numerous national records and the afore-mentioned Olympic hardware. Yet he had struggled through a multi-year stretch of injuries and some sub-par performances, leaving many to wonder if, at age 34, he was done. With this year’s string of personal bests, including this huge new triumph, Meb is not ready to hang up the waffles quite yet and he won’t be anyone’s underdog anymore.

It’s not just his underdog status that made him a favorite around the office, however. Meb is a truly beautiful human being, which is quickly apparent to anyone who meets him. Two years ago after a disastrous 20th place finish in the five boroughs, he did something I had never heard of before or since: he bought lunch for the entire Road Runners staff. That’s a hundred people. If you want to measure a man’s quality, look to how he responds to defeat. It’s easy to be graceful in victory, and Meb has certainly met that standard as well in the past week, but his goodness is fueled by something deeper than the circumstance of the moment.

Meb’s victory is a redeeming gift to the sport and to America; it would not be a huge stretch to call it an Athletics equivalent to the ascendancy of Berack Obama. Like with president Obama, the lunatic fringe is wringing its hands about whether Meb Keflezghi, born in Eritrea but an American citizen and resident since early youth, is truly an American.

There should be no doubt however. Only one of the scores of runners lining up for the USA Championship, which took place within the larger marathon, wore the letters USA on his chest, right above the three letters on his name bib. He knows and appreciates better than most what America is all about and as he cruised to the finish line, Meb pointed to the nation’s abbreviation and gave thumbs up. He brought the victory home to all of us, for the first time since another child of immigrants, Alberto Salazar who was born in Cuba, did so way back in 1984.
Posted by citymouse at 6:37 PM