Sun of the Beach 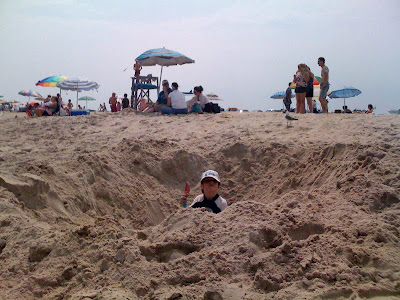 Like our President, Sebastian finds himself in a gigantic hole, not of his own making...

It has been ten years since I’ve been back to Chincoteague, where I had had been every summer as a youth and I was surprised how little had changed. There are a few more beachy-schlockity shops crammed along Beach Drive but hey, it’s a beach town, right? Everything seems to have a fresh coat of paint and it feels more, well, prosperous. Of course we’re all upset that our favorite seafood buffet is replaced by “that Mexican Place” (actual name of the joint) but everything changes.

I always felt like it was a sleepy and depressed fishing town overlooking a once-spectacular-but-played-out fishery that resented the beach combers bunking in their spare rooms. Embracing the new reality has made the place feel more fresh and vital, while providing a reason to preserve what makes the place so different.

The nearby beaches on Assateauge, on the other hand, have changed a lot. There were once an elaborate network of bath houses behind formidable dunes. The dunes have washed away leaving a wide beach and two rows of oyster shell roads with parking and temporary facilities for showering, dressing, and answering nature’s call. Seems a lot more sensible actually and the beaches are flat and wide.

There was also something visual going on that took me a while to appreciate. The umbrellas and bathing suits and even the ocean seem much more vivid than what I am accustomed to seeing on Long Island. Finally, I understood: the light is much more intense. Northern light is filtered by more atmosphere, which gives it a pale, fleeting quality, whereas further south the light is more direct and brighter.

I suppose John Singer Sargent would prefer Nantucket or Montauk but I’m pretty sure van Gogh would chose Assateague.
Posted by countrymouse at 12:22 PM