This Kid is Amazing. 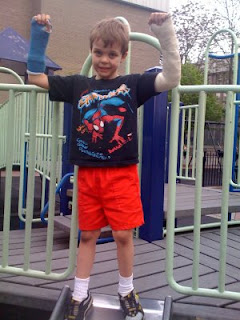 I am astounded at Sebastian's high spirits. Of course, he moped for a few days after his accident (the extreme pain might have had something to do with it), but he has quickly moved on with his life and has begun to make lemonade.

One of his favorite tricks is to get on hands (or rather elbows) and knees and propel himself forward with his legs along the wood floor like a snow mobile. It's pretty hilarious and ingenious how he has quickly adapted to his new situation.

Time moves slower for children and a day seems like a really long time, so from Sebastian's perspective, he has had the cast on forever, even if it has only been ten days of real time. So he has already adapted and moved on.

There is a lesson in there for us: he's not wasting any time at all worrying about what he cannot do. He is finding the virtue in an undeniably adverse situation.
Posted by Peter at 10:42 PM