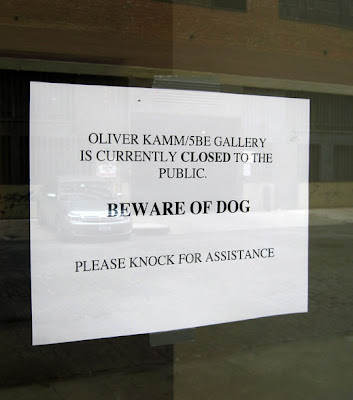 If the sterile art, unfriendly staff, industrial surroundings, long walks,
opaque business practices, instituional spaces, and general unpleasantness
of the neighborhood don't scare you away from this Chelsea gallery, perhaps a
mad dog will do the trick!
Following on our revelatory visit to the Lower East Side galleries, we were wondering how we would find the Chelsea Scene. Let’s just say that it did nothing to change our Bowery Bullishness into 10th Avenue Ballyhoo.
It’s not just that the spaces are cold, the art uber-commercial, the walks interminably long, the staff often quite frosty, and the neighborhood about as welcoming as the surface of the moon. All of that is beyond dispute. The new thing that I noticed, and I suppose that it’s always been there, is that many of the galleries actively don’t want most people to buy their art. Which seems kinda strange.
It just got to be a bit much as we were bombing through the galleries in the Chelsea Terminal Building and almost none of the galleries listed prices on the "price list." My companion had to ask for the version of the price list that actually includes prices. When she jokingly probed the reasons for this double-list phenomenon (which made me wonder if there was more than one set of price lists behind that white window-wall) the attendant (who was really quite friendly) said that the gallery didn’t want to offend anyone by being too out-front with the prices.
Offend who? The one naive in the universe who mistakes the gallery for a museum? The artist who thinks the work should cost more? The jealous artist who thinks it’s worth less? The collector who spent five times more for lesser work in Miami?
The coyness actually offended me alot more for two reasons. First, as an art collector, I want the process to be easy, invigorating, and I want to know that I’m not being $crewed. Secondly as an artist, I want to know that the galleries are out there trying to sell work. We [artists] cannot survive if they do not. So if a gallery’s mission is to get art out there and into people’s lives, making the act of collecting more difficult seems...counterintuitive.
Well, it turns out that my sense offense was correct. What those galleries were doing was more than annoying; it was illegal. As retail establishments, galleries are required to post "in plain sight" the prices of all works for sale. Not "on request" and not behind the desk. In plain sight.
Remember back in the 80’s, when galleries had to be sued into posting their prices? This is the same old $hit and presumably for the same reasons. After reading about the experiences people had back then, it wouldn’t surprise me if there were, in fact, multiple price lists for various "types" of customer. It used to happen all the time and probably still does.
I don’t wish to make sweeping judgements: many of the galleries in Chelsea do everything exactly right. Many have been pushing art into public life for longer than I have been drawing breath and we can be thankful for all of them. And, let’s be honest, I would be thrilled to be represented by many (though certainly not all of them). But speaking in general terms, the district has a cold, unfriendly, and even outwardly hostile feeling that is not helpful to the cultivation of growing class of art collectors.
It’s like the inexplicably angry stare of a supermodel on the runway. Don’t worry: I won’t offend by asking how much that skirt costs. I’ll visit someone who actually wants to do some business.
Posted by citymouse at 10:46 PM